LPG (Liquefied Petroleum Gas) has a number of advantages over petrol and diesel as a motor fuel: it is relatively cheap and environmentally friendly, burns cleanly (meaning fewer or no toxic emissions like carbon monoxide or diesel particulates), and we have a readily available natural supply here in Australia. However, it has some curious properties that mean it requires considerable expertise to safely and efficiently handle.

In our continuing series on our company's history, we delve into the memoirs of David Batchen, the founder of D.J Batchen, to see what we might learn. In today's post, we explore the challenging beginnings of what would soon become D.J Batchen's largest area of business: the Auto LPG dispenser, and seven particular quirks of LPG that brought about these challenges. Next week we will lift the lid on the innovative excellence that dealt with these challenges, and means that today D.J. Batchen Auto LPG dispensers have an "unparalleled reputation for performance, reliability and durability".

...a former senior executive of a company called Rheem came to us with a proposal: that we should build LPG dispensers, and he should sell them. This was in response to a government decision to remove excise costs on LPG in order to promote its use as a motor fuel, a move they believed would reduce pollution and make use of a locally sourced hydrocarbon which was being produced in excess of our requirements.

This was the start of a completely new industry.

Petrol had been used in Australia for about a hundred years, and the handling techniques and equipment were well known. LPG had such different properties that virtually none of the existing petrol technology could be utlilised. Holland was the only other country to have embraced LPG as a motor fuel, but they had made limited progress in meeting this new challenge. Australia therefore had a golden opportunity to become world leaders in the safe handling of LPG for this application.

The nature of LPG makes it difficult to handle:

1. It is stored as a liquid under moderate pressure which varies as its temperature varies.

2. It has a very low viscosity, and therefore it leaks readily.

3. The resulting reduction in pressure when it leaks causes cooling as the liquid vaporises, and this can cause cold burns if the vapour or the cold equipment contacts the skin.

4. It expands rapidly with temperature increase, which means that storage tanks must never be completely filled with liquid, to avoid over-pressuring the tank should temperatures rise.

5. The rapid expansion with temperature increase interferes with metre accuracy.

6. Finally, if liquid escapes to atmosphere it forms about 250 times its volume in gas, and this may present a considerable safety hazard.

7. LPG also has no lubricating qualities, so that equipment which involves rubbing surfaces must be made of materials which do not require lubrication.

It is not surprising that this product was treated with great respect, and some trepidation, by those new to the industry. It was claimed -- with some justification -- that LPG, like God, worked in mysterious ways.

These oddities of LPG meant that simple petrol expertise wouldn't be enough: standard meters, nozzles, pumps and hose connections were not capable of dealing with this highly unusual -- but incredibly useful -- alternative fuel. Something else was needed. Stay tuned for our next instalment, as we explore what exactly that "something else" was. 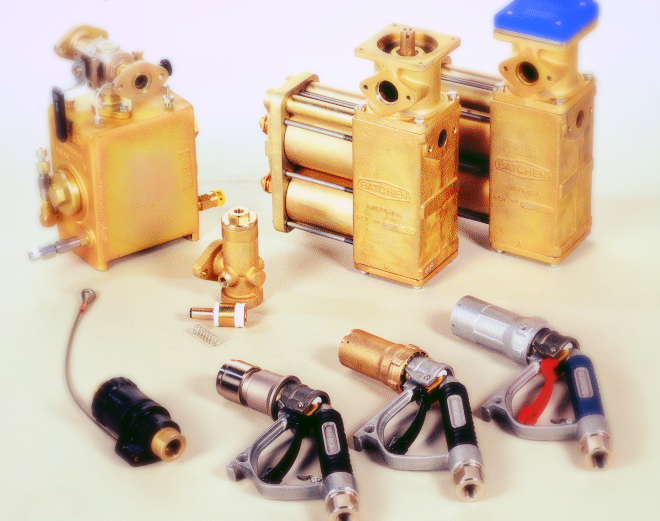